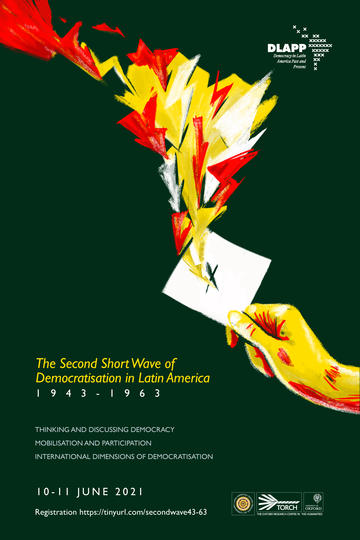 The online conference aims to examine the understudied theme of what Samuel Huntington referred to as the ‘second short wave’ of democracy (1943-1963) in Latin America. In this twenty year period, thirteen (out of twenty-one) countries in Latin America underwent democratic transitions, significantly outpacing the number of nations that remained under authoritarian rule. As per Huntington, this corresponded to almost a third of all democratic transitions that occurred during the period. Although most countries experienced regime reversals in the following decades, Colombia, Costa Rica and Venezuela remained stable democracies at least until the late twentieth century.

This drive for democratization and its eventual demise in the 1960s may shed key insights, not only on our understanding of how and why democracy succeeded or failed; but also on the very definition of democracy, its language, limits, and relation with other issues such as development or modernization. Reading this wave in a global context, for example, may drive us to question why this democratising tide was successful in Europe, but less so in Latin America; what role did the larger Cold War play in the tensions between reform and revolution; and how does this legacy illuminate current understandings and debates over democracy and its meanings. In doing so, the conference will look to combine historical perspectives on democracy with that of the social sciences.

The event is organized in collaboration with the Latin American Centre and the Oxford Research Centre in the Humanities (TORCH).

Brazilian Reconstitutionalization in the Second Wave: A Competition of Democracies

Democratisation and Inclusion: What Women’s Participation Tells Us About the Second Wave of Democracy