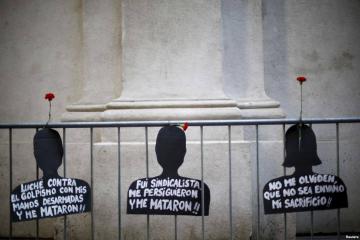 Transitional Justice mechanisms have advanced truth, memory, justice, reparations and institutional reforms in Chile, albeit at an irregular rate. However, these efforts have focused mainly on state actors and avoided to look at the role and possible responsibility of the economic accomplices of Pinochet’s dictatorship. This round table aims to discuss the extent to which private actors participated in the perpetration of crimes against humanity in Chile. The overarching objective is to debate why business accountability for human rights violation should be part of transitional justice in order to achieve justice, memory, reparation and deterrence. The discussion will be chaired by Leigh Payne and Gabriel Pereira.

Marcos González Hernando is Affiliated Researcher at the University of Cambridge and Visiting Lecturer at City, University of London. He is interested in the sociology of knowledge and intellectuals, and in the history of the social sciences, having worked both in Chile and the UK. His recently finished doctoral dissertation, supervised by Professor Patrick Baert, focused on the institutional and intellectual transformation of think-tanks in the aftermath of the 2008 global financial crisis. He has also published on the history of Chilean social sciences and their relationship to the public debate.

Tomás Undurraga is Research Associate at UCL-STS, and has been a post-doctoral researcher at the University of Cambridge and lecturer at Universidad Católica de Chile. Tomás is a cultural and economic sociologist interested in comparative political economy, varieties of capitalism, sociology of elites, science and technology studies and media studies. His empirical research has been focused mainly in Latin America, especially Argentina, Brazil and Chile. His current research concerns the production and dissemination of economic ideas in the Brazilian public sphere

Shaping the autonomy of rural communities in the process of mining expansion: The daily practices of water use in the Atacama Desert, Chile. Cristian Olmos (UCL)
Cristian Olmos is a Chilean architect and urban designer with more than ten years of work experience in the public sector, specifically in the field of improvement of urban spaces, housing projects, reconstruction, recovery programs and policies in the context of isolated, rural and aboriginal communities. Currently, Cristian is a PhD candidate at the Bartlett Development Planning Unit researching changes in water practices, their spatial manifestations, as well as their implications for the autonomy of rural communities over time.

3. The great contribution of Cassese and his pending complaints: Sebastián Smart (UCL)

​Sebastian Smart, is a co-editor of the forth coming volume ‘Matar por dinero: Los cómplices civiles de la dictadura Pinochetista’, the first book that discussing the role of private actors in the perpetration of human right abuses during Pinochet’s dictatorship. He holds a law degree from Pontificia Universidad Católica of Chile, a Master’s in Human Rights from University College London (UCL) and is currently pursuing a PhD at the Institute of the Americas, UCL. His current research focuses on socio-environmental movements and human rights violations committed by non-state actors in the extractive sector.