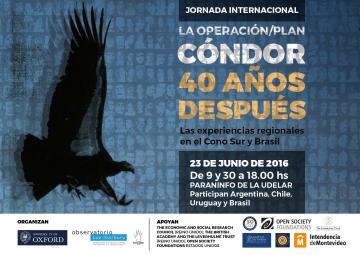 Between late November and early December 1975, Operation Condor was formally created in Chile at a meeting of South America’s security forces. It was a secret transnational network of intelligence sharing and counterinsurgency operations set up by Argentina, Bolivia, Brazil, Chile, Paraguay, and Uruguay to persecute political opponents throughout the region, resulting in hundreds of illegal detentions, murders, disappearances. Forty years later, it is important to reflect on the steps taken across the region to clarify the crimes committed by the transnational repressive coordination.

In order to do that, the Latin American Centre of the University of Oxford and the Observatorio Luz Ibarburu, together with the Human Rights Secretariat of the Uruguayan Central Trade Union, are organizing a three-day event in Montevideo (Uruguay) on June 22, 23 and 24, 2016, within the framework of the project “Justice without Borders: Accountability for Transnational Crimes in South America,” funded by the ESRC’s Impact Acceleration Account of the University de Oxford, The Leverhulme Trust, The British Academy, and also supported by Open Society Foundations.

On Wednesday, June 22, a press conference will inaugurate the event.

On Thursday, June 23, a conference will include the above listed speakers and the main objective will be to exchange experiences and compare the advances in recent years in Argentina, Uruguay and Brazil relating to the investigation of Operation Condor’s transnational crimes.

On Friday, June 24, a closed-session workshop will be held with the participation of human rights activists, judges, prosecutors, lawyers, and members of national ministries. Taking as starting point the Operation Condor trial in Buenos Aires, but also investigations in Uruguay, Brazil, and Chile on the same subject, the discussion will focus on the legal and factual challenges associated with investigating transnational crimes. The goal is for Uruguayan prosecutors, lawyers, judges, human rights activists, and government officials to debate and exchange experiences with their Argentine, Chilean, and Brazilian counterparts involved in the Operation Condor trial about the investigation and prosecution of transnational crimes. Working in smaller groups, the aim is to develop suggestions for concrete tools and strategies to implement at the national and regional levels to facilitate the investigation of Operation Condor crimes.

For further information about the project, please visit: http://www.lac.ox.ac.uk/justice-without-borders-operation-condor-trial-and-accountability-transnational-crimes-south-america