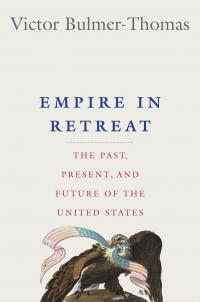 Victor Bulmer-Thomas is Emeritus Professor of London University, Honorary Professor at the Institute of the Americas, UCL, and Associate Fellow in the United States and Americas Programme, Chatham House. He has been a Director of the J.P. Morgan Brazil Investment Trust since 2010. From 1992-8 he was Director of the Institute of Latin American Studies, London University, and from 2001-6 he was Director of the Royal Institute of International Affairs (Chatham House). He was editor of the Journal of Latin American Studies from 1986 to 1997. He has written or edited some thirty books including The Political Economy of Central America since 1920, The Economic History of Latin American since Independence and The Economic History of the Caribbean since the Napoleonic Wars. His most recent book, published by Yale University Press in 2018, is Empire in Retreat: the Past, Present and Future of the United States. He has been awarded honours by the governments of Brazil, Colombia and the United Kingdom.