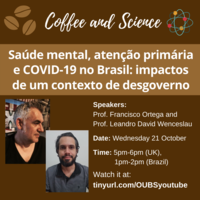 Leandro David Wenceslau, Department of Medicine and Nursing at the Federal University of Viçosa, Minas Gerais 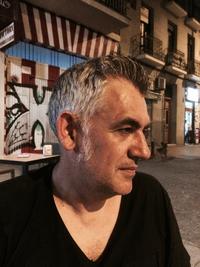 Francisco Ortega is Full Professor at the Institute for Social Medicine of the State University of Rio de Janeiro and Visiting Professor at the Department for Global Health and Social Medicine of King’s College, London. He is also Director of the Brazil Center for Global Health at the State University of Rio de Janeiro. He was invited professor at the Institute of Social Sciences, University of Buenos Aires, at the Max Planck Institute for the History of Science of Berlin, at the Institute of Political Science, Oldenburg University, at the Centro de Ciencias Humanas y Sociales  (CSIC) in Madrid and at the University of Bielefeld. He is also Member of the Advisory Board of the Movement for Global Mental Health and Member of the Steering Committee of the Global Social Medicine Network. His research examines the many emerging ‘neuro-disciplines’ such as neuroethics, cultural neuroscience, neuroaesthetics, and the cerebralization of autism and other psychiatric disorders. In addition, he has undertaken qualitative research on the mechanisms of social and personal identity formation in individuals diagnosed with autism and attention deficit hyperactivity disorder (ADHD) in Brazil and on the challenges for implementing global mental health policies in Brazil. His many books include  (With Fernando Vidal) Being Brains. Making the Cerebral Subject. New York: Fordham University Press, 2017; Corporeality, Medical Technologies and Contemporary Culture. London: Routledge, 2014; (With Fernando Vidal) Neurocultures. Glimpses into an expanding universe. Frankfurt and New York: Peter Lang, 2011. 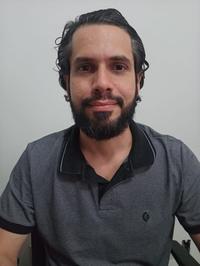 Leandro David Wenceslau is family physician and assistant professor in the Department of Medicine and Nursing at the Federal University of Viçosa, Minas Gerais. He holds a Master's degree in Education from the Federal University of Pernambuco and a PhD in Public Health from the Institute of Social Medicine at the State University of Rio de Janeiro. He has research and publications in the area of integrative medicine, social sciences in medical education and mental health in primary care. He is the author with Francisco Ortega of the chapter “Urban mental health and the moral economies of suffering in a 'broken city': Reinventing depression among urban residents in Rio de Janeiro” that is part of the collection “Urban transformations and public health in the emerging city” edited by Michael Keith and Andreza Aruska de Souza Santos.