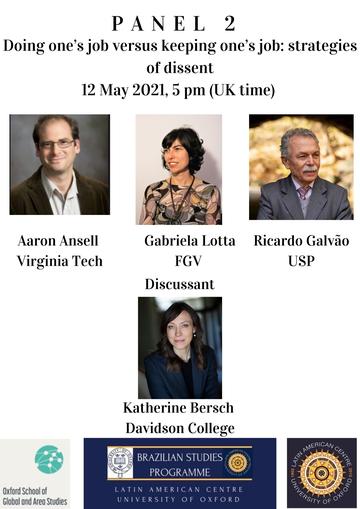 In this panel we will examine the ethics of public service in Brazil, considering negotiations, concessions, omissions, and actions. Here, we discuss some of the tensions and conflicts experienced by members of the different technical government bodies, which range from voicing concerns to showing loyalty, and from strategising non direct confrontation to exiting public service. We are particularly interested in the impacts of administrative reform on Brazilian civil service.

Abstract: The current scientific denialism is a form of pseudoscience based upon the persistent construction of false controversies about scientific models and results that threaten economic interests, political ideologies, or the comfortable situation of powerful groups. Unfortunately, this scheme is being maliciously exploited by some administrations, worldwide, to ridicule scientists and invalidate results that are against their public policies and ideological doctrine. In this talk, I will discuss the difficulties faced by scientists working in such conditions and how they can responsibly carry out their duties.

Abstract: This presentation will analyze practices of opposition and protection developed by Brazilian bureaucrats to face political interferences. We analyze data collected with civil servants during two periods: Dilma’s Rousseff Impeachment and Bolsonaro’s government. Data show how bureaucrats develop different practices of resistance, sabotage, silence, and shirking. The analysis draws on how the strategies are developed and changed over time, based on bureaucrats’ profiles and decisions, their network of support, and officials’ reactions.

Abstract: While President Jair Bolsonaro ran for office on an anti-corruption platform and promised to end the ‘Old Politics’ of ‘Give-and-Take’, his policies have moved in the opposite direction. This paper situates Bolsonaro’s proposed Administrative Reforms (under congressional review as of April 2021) within the broader context of his policies in order to compare his administration to those of the Workers’ Party (PT) executives that preceded him. The comparison focuses on the municipal level, and is especially concerned with those small, impoverished municipalities commonly found in Brazil’s underdeveloped northeast. This paper argues that the PT governments successfully de-patrimonialized important state resources, and that the Bolsonaro administration has begun re-embedding these resources in patrimonial circuits of patron-client exchange.

Dr. Katherine Bersch is the Nancy Akers and J. Mason Wallace Assistant Professor of Political Science at Davidson College. She is also an investigator with The Governance Project at Stanford University’s Center on Democracy, Development, and the Rule of Law. Bersch is the author of When Democracies Deliver: Governance Reform in Latin America (Cambridge University Press, 2019), and her work on bureaucratic capacity has appeared in Comparative Politics, Governance, Public Administration Review, and Studies in Comparative International Development, among others.