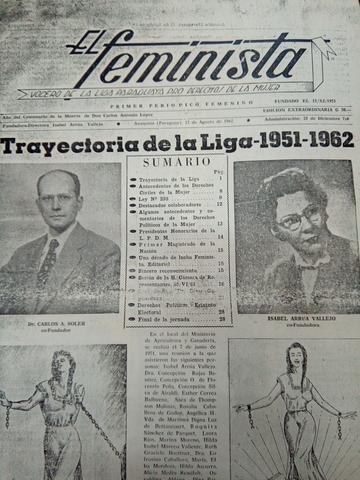 The article analyzes the factors that allowed the last country in Latin America without political rights for women to establish them in the midst of a civil-military dictatorship. Despite the efforts made by feminist organizations since the beginning of the twentieth century, it was not until the 1950s and 1960s that changes for equality were made at the legislative level, a period that coincided with the beginning and consolidation of the civil and military dictatorship of Alfredo Stroessner (1954-1989). It is argued that international pressure, especially from the Organization of American States, and the dictatorship's need to pose as a democracy in connection with the anti-communist expectations of the period, allowed the feminist organization Liga Paraguaya Pro Derechos de la Mujer to convince the dictator to proclaim the suffrage. With limitations, women joined the political game, while if married remained dependent on their husbands.

Jazmín Duarte is currently a doctoral candidate in Latin American Studies at the Department of History of the University of Cologne (Germany). Her doctoral thesis is titled "Usos políticos de la masculinidad durante la dictadura stronista (1954-1989)".