New paper out by Dr Andreza A. de Souza Santos et al. published in Nature Scientific Data, bringing data on local policies in Brazil to contain the spread of #COVID19

Local governments play a critical role to contain #COVID19, especially in Brazil where there is no national response. And yet this type of information is often scattered. In this paper the authors detail the results of a survey with 5568 municipalities + the Federal District in Brazil on the first dates of lockdown and easing of physical distancing.

The dataset is based on a survey with responses from 4027 mayors or health secretaries. The data shows that several municipalities rapidly closed non-essential services, prohibited large gatherings, reduced public transportation, and implemented cordon by mid-March. At that time, COVID-19 cases were restricted to a few highly populated state capitals, with cases mostly associated with overseas travel.

Of the total of 3,958 mayors that responded to the question on closure of all non-essential services, 3,062 municipalities adopted the measure and among those, 2,738 (89.4%) implemented the measure before the first reported case in their municipality (Fig. 1b). 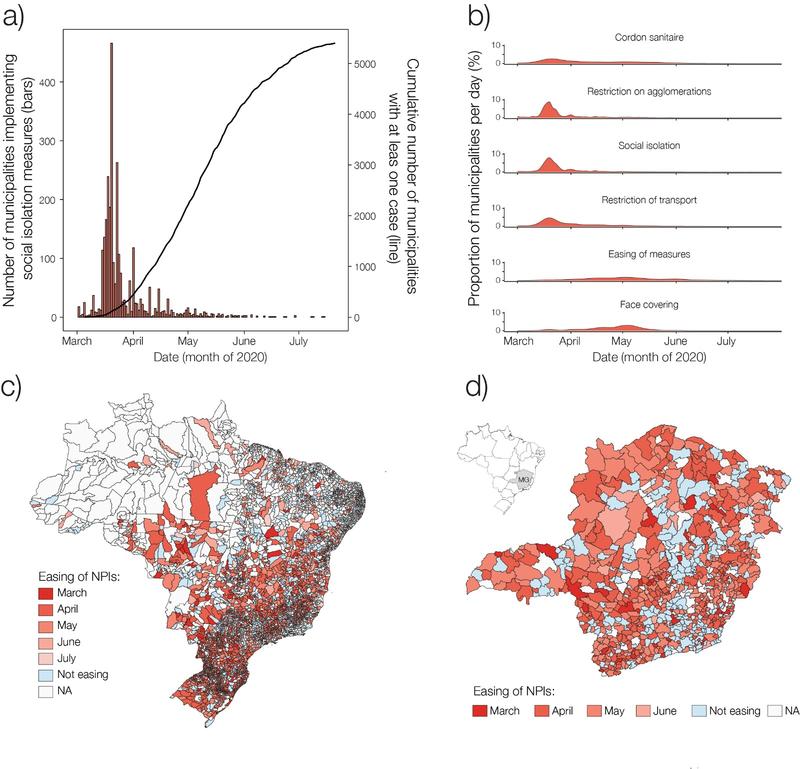 Although distancing measures were adopted across Brazil early in the pandemic, easing of these measures began as early as the end of March, often disregarding decisions by neighbouring municipalities.

This is a timely paper to reflect on the lack of national coordination in the response to the pandemic in Brazil. City borders are porous and cities that have maintained strict social distancing policies may face a growing number of cases because of external decisions.

The authors thank all mayors and health secretaries who responded to the Survey, the CNM who led the survey with local governments, and to all authors who described and analysed this dataset.