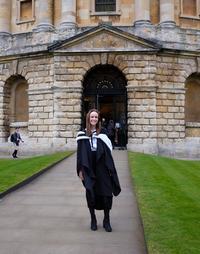 In the summer of 2018, I was thrilled to depart Oxford with a Master of Science in Latin American Studies, graduating with Distinction and winning the Crawley Prize for my extended essay. I must admit that I never expected to spend a fourth year at Oxford doing a postgraduate degree, but taking a year to study the history and politics of a region I am truly passionate about reinvigorated my love of learning and gave me a completely different Oxford experience.

I first arrived at Oxford as a Philosophy, Politics and Economics (PPE) undergraduate student in 2014. Before freshers’ week was even halfway through (and more importantly, before our library inductions), we had been sent our first double-page reading list and asked to write a 2,000 word essay on state formation by the end of the week. It soon became clear that this was typical of Oxford - rapid pace, high expectations, and trying to cram your social life amongst your academic commitments. Looking back, I am amazed at how far we pushed ourselves during the short 8-week terms, using the holidays to recover and catch up on extra reading and revision before doing it all over again.

Oxford is an intense and sometimes overwhelming place, but it is also the most stimulating and exciting place to spend time. In a typical week, I would debate my work in tutorials; queue outside the Oxford Union for a chance to listen to people ranging from Anna Wintour to Marine Le Pen speak; rush between boxing and cheerleading practices, college socials, and Oxford’s delightful selection of historic pubs, as well as spending countless hours reading in the breath-taking Radcliffe Camera.

I am often asked why I chose Latin American Studies (I think I was one of three people on the course without Latin American roots), but during my gap year I had travelled around South America and was consistently appalled at my lack of knowledge of the region. I spent a month in Santiago, Chile but until then had never heard of Pinochet, let alone the military dictatorships and human rights crises’ that spread through most of the continent. Consequently, in my third year I jumped at the opportunity to take a Politics of Latin American module and on finding out about the MSc course, made quite a spontaneous decision to apply for the one-year course.

The highlight of the MSc for me was the chance to write an extended essay, as I had never had the freedom to study and write about a topic of my choosing. I took on the task of trying to explain the liberalisation of Chile’s abortion laws in 2017, inspired by my Spanish teacher in Chile, who first opened my eyes to the stark discrepancies in women’s rights across the world.

Overall, my path to the MSc was quite unconventional - I spoke (at best) conversational Spanish, I was born and raised in the UK, and I had accepted a job at a strategic consulting firm for the end of the year. However, the beauty of postgraduate studies at Oxford is the diversity of people - whilst you may not share the same hobbies, or seek out the same career path, you are united by a passion for your subject and a shared intellect.

My year at the Latin American Centre will hold memories of some of the most interesting and challenging academic conversations I have had, incredibly inspiring and thoughtful tutors, and the wonderful people I had the privilege of studying with.

Since graduating, I have been working for L.E.K. Consulting in their London office and spent the last three months on secondment to a tech start-up that is developing a 3D design and collaboration platform using Virtual Reality. In terms of my next steps, I will be relocating to L.E.K.’s Boston office for 6 months in late 2020 and hopefully spending another month exploring Latin America afterwards!