Jazmín Duarte Sckell, MSc (2016-2017) on her trajectory from Asunción to Oxford and Cologne 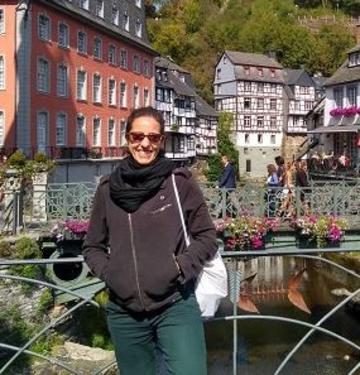 I went to Oxford in 2016 from Asunción to start my MSc in Latin American Studies at the Latin American Centre because I was seeking for an interdisciplinary training to look at and understand Latin American history. Coming already from an interdisciplinary background from a bachelor's degree in Sociology and another in Communication Sciences at the Catholic University of Asunción, I was keen on applying different theoretical perspectives to social problems. Through university I became interested in a historical analysis of the phenomena, understanding the importance of knowing the process of something to fully understand our present.

A subject that particularly interests me about my country is the military dictatorship of Alfredo Stroessner (1954-1989) because of the deep ramifications it had politically and culturally in my country's society until today. I explored and researched this topic during my dissertations for both degrees but looking at different phenomena related to education in the same time period. In one I focused on the analysis of the development of an academic department within the Catholic University, which was the main space of resistance to the dictatorship. In another, I looked at the process of deterioration of public education through the case of the Colegio Nacional de la Capital, a public high school landmark.

As my interest towards feminism grew I also got interested in learning more about women’s history so I got particularly curious about why were women granted rights during a dictatorship, as it was my country’s case, and with this research idea in mind I applied to Oxford.  I was very privileged to have access to the university, through a grant from the Paraguayan government, and have the close guidance of Prof. Eduardo Posada-Carbó, Lecturer of the History and Politics of Latin America, who supervised my master's thesis. The overall experience, for all the professors as well as my classmates, was amazing.

Halfway through my master's degree, through thinking more about the construction of gender during an authoritarian regime, and the links between power and the Latin American “machismo”, I became convinced of my interest in pursuing a doctorate. I prepared a proposal that I discussed with dear Prof. Leigh Payne, who works on gender, with the aim of obtaining a degree in Sociology where the subject would be more suitable within the university. I was very happy to get an offer, but unfortunately I had no scholarship that would allow me to continue in Oxford.

Nevertheless, not long after, I found another opportunity in Germany to work with Prof. Barbara Potthast, a very important historian who researched 19th century gender history in Paraguay. Given the professor's experience and knowledge about my country, I was very excited about the possibility. With her support I applied for a DAAD scholarship, which I eventually earned. Today I am a doctorate student at the University of Cologne where I am working to understand the construction of hegemonic masculinity in the stronista dictatorship in Paraguay (1954-1989).  I would like to contribute a bit to the understanding of the historical construction of masculinity in Latin America, which is less studied when analyzing gender, as I believe it is an important element to understand in order to achieve much needed social change. Once I have made progress in my work, I would for sure like to share it with the LAC.