Fiscal Policy in the Time of Coronavirus: Constraints and Policy Options for Latin American and Caribbean Countries

With authorization from the IDB we publish an analysis of fiscal policy options for Latin America and the Caribbean as the crisis of coronavirus develops, written by Alejandro Izquierdo and Martín Ardanaz

By Alejandro Izquierdo and Martín Ardanaz |

Latin America and the Caribbean is suffering a heavy blow as the novel coronavirus is spreading, governments are sending people home, and only a few businesses are allowed to operate. This happens against a grim backdrop of financial fragility, and a flight to quality assets in developed countries, with the resulting doubling of credit spreads in emerging markets since January 2020. This is a triple whammy with a demand shock, a supply shock, and a financial shock, all hitting at the same time.

What should governments do? Fiscal positions are not as good as in the past. Stimulus policies that work in normal times will not work in the time of coronavirus—as this crisis calls for very different measures—, and financing may be limited if flight to quality continues.

Let’s start by comparing fiscal positions then and now, using the 2008-2009 US Great Recession as a benchmark. In 2008, the average overall balance in Latin America and the Caribbean was -0.4% of GDP, compared to -3% in 2019, or a difference of 2.5% of GDP. Moreover, average public debt has grown dramatically to 62% of GDP in 2019, compared to only about 40% of GDP in 2008. These numbers point to a clear deterioration in the fiscal accounts, and they are very much a consequence of badly managed fiscal policies before, during, and after the US Great Recession. Before the recession, and after the commodity boom that started in 2003, several countries considered this positive shock as permanent, and increased public expenditure accordingly.

During the 2008-2009 Great Recession, most governments in the region increased expenditure swiftly to sustain aggregate demand, given solid fiscal positions and relatively low debt levels. It is interesting to note that while the size of the fiscal stimulus (proxied here as the deterioration of the primary balance in 2009 vis-à-vis 2008) averaged close to 3% of GDP, it was not the same for everybody, and it largely depended on starting debt levels. Figure 1, which links debt in 2008 to changes in the primary deficit in 2009, shows that countries with low starting debt positions were able to implement a substantial fiscal stimulus, whereas those with very high debt levels had to contract. There is a stark contrast between Chile’s and Jamaica’s options during the Great Recession: Chile had very low debt (5% of GDP) and it was able to expand by 8% of GDP, whereas Jamaica had very high debt (129% of GDP) and had to contract its fiscal position by 1.3% of GDP. 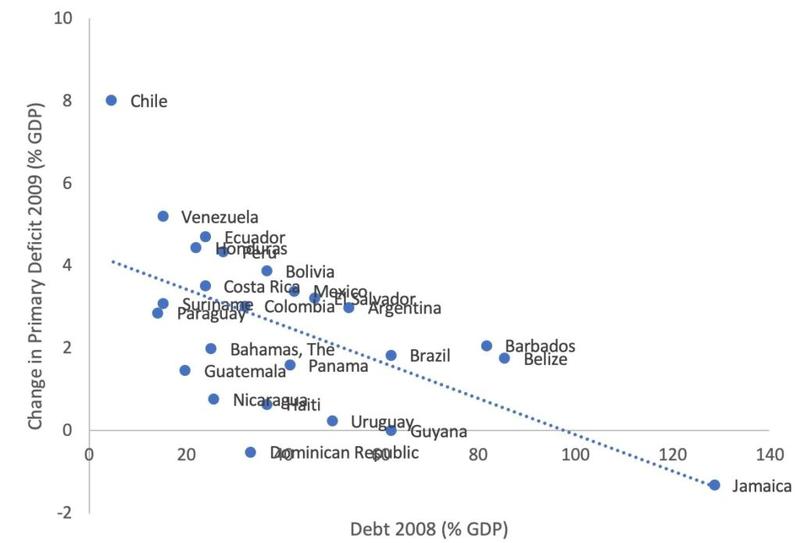 Source: Own calculations based on WEO (IMF)

What does this tell us about the region’s ability to conduct expansionary fiscal policies today?

Since debt levels are much larger now -and considering the relationship shown in Figure 1- the region would, on average, be able to respond with a fiscal expansion of roughly half the size of that prevailing in 2009. However, there is a fair amount of heterogeneity within the region, which should be considered when deciding on the size of fiscal packages.

Another key issue to look into is the composition of the fiscal stimulus, because it has implications for fiscal sustainability in the future. If true counter-cyclical policies are to be used, then only expenditures which are transitory in nature—e.g., infrastructure spending, or strictly temporary transfers—should be implemented. Past experience in this respect is not encouraging: in the 2009 fiscal expansion, almost two-thirds went into increases in salaries and permanent transfers, two items which are very difficult to reverse ex post (see Figure 2). This dynamic of stimulus through generalized increases in current expenditures is actually an important reason why many countries in the region went into persistent fiscal deficits later on, because they could not reduce spending and decided instead to get further indebted. It is also consistent with findings from our paper on the cyclical behavior of different spending items across the developing world. It is therefore key that governments pay attention to expenditure composition and temporality when designing policy packages to address the coronavirus crisis.

Figure 2: The Composition of Fiscal Expansions in Latin America and the Caribbean in 2009

Source: Own calculations based on official data

What constraints should Latin American and Caribbean governments consider in the time of coronavirus?

One constraint is that package sizes will need to be smaller, unless countries are willing to substantially reallocate resources within current budgets, or want to run additional macroeconomic risks.

The IDB’s flagship report on public expenditure in the region indicates that there are substantial technical inefficiencies in public expenditure, stemming from leakages in social spending, higher public sector wages than those prevailing in the private sector, and inefficiencies in government purchases of goods and infrastructure. These inefficiencies amount to 4.4% of regional GDP, but they cannot be dealt with swiftly. One possible strategy is to allow for additional expenditure needed right away—such as health spending—while engaging immediately in inefficiency reduction policies that will yield results later on and ensure sustainability.

Another constraint is financial markets. Latin American and Caribbean EMBI spreads have doubled, and countries are on average paying 700 basis points over US Treasuries. Markets are still open for many, but there has been substantial flight to quality, and according to the Institute for International Finance, “cumulative outflows since late January have surpassed the levels observed at the peak of the global financial crisis and are an order of magnitude larger relative to the size of the global economy than in stress episodes such as the Asian financial crisis or the taper tantrum.” Things don’t look good on this front, and for some countries like Argentina and Ecuador—with EMBI spreads around 4200 basis points and 5200 basis points, respectively—credit is plainly not available. Their only option may be loans from multilaterals.

What can governments in Latin America and the Caribbean do to fight the challenges raised by the coronavirus?

This may be obvious, but we will state it anyway: the focus should be on fighting the coronavirus spread, prioritizing health expenditure for effective prevention, detection, treatment and containment. The main challenge here is to avoid a health infrastructure collapse. The time for growth will come later. Moreover, standard macroeconomic stimulus policies may not be effective given the nature of the Coronavirus crisis. Even though capital expenditure is typically the best instrument for counter-cyclical policies as it has the largest fiscal multiplier, it is not clear that it would work at a time when construction sites may be a source of contagion.

Given that public health services are provided largely by local governments, they need resources and coordination quickly. Since institutions and implementation capacity is lower at this level of government, additional resources should be accompanied by technical assistance from federal governments for them to be effective.

The fact that many people will lose their income while staying confined makes it imperative to design very well targeted subsidy programs to vulnerable groups, particularly to those that are poor and informal. Given past experience, it is key that these programs be designed as temporary. Many countries may engage in increases to existing transfer programs, running the risk of making these transfers permanent. Structural programs such as conditional cash transfers may be used to identify those that need to be targeted, but subsidies due to the coronavirus crisis should run through separate accounts, with clear sunset clauses to ensure they are temporary. This will be a challenge, because there is evidence that there is a substantial number of poor and informal workers who are not covered by structural programs, and this group is the one that cannot wait out the crisis at home because they live paycheck to paycheck.

In addition, governments with big enough shoulders could engage in temporary tax deferment for regions, people, and firms more fiercely struck by the coronavirus. Social security systems that have provided loans to pensioners could temporarily defer payments coming due.Last but not least, governments with enough fiscal space should help sustain proper functioning of credit markets. With increased uncertainty, several firms are finding it difficult to refinance even short-term loans, and there is a risk of massive layoffs if liquidity issues turn into solvency issues for otherwise sound firms. Governments can step in either directly through bond purchase programs, or indirectly by backing asset purchase programs implemented by central banks. This is being done in the developed world, where resources are large and allow for massive packages that, if successful, may entail low fiscal costs at the end of the day. The challenge for emerging markets is to do this in large enough amounts that will make this policy successful, and in transparent ways that will show in fiscal accounts, with clearly targeted and prioritized programs for loans and bond purchases, and subsidies only for interest-rate differentials. If this policy is not carried out properly, many of these loans run the risk of turning into grants, something the region cannot afford.

Given the current context and the large list of needs, the region must move decisively in search of funding for a very tight set of policies, tapping credit markets if available, but also accessing loans from multilaterals. Larger countries may try to obtain swap lines from the Federal Reserve. Smaller countries have a higher chance of getting loans from multilaterals that will be useful in terms of size, although it will be more challenging for larger countries given the limited resources available from multilaterals. In this respect, it may make sense to think about capital increases for these institutions to provide the additional resources needed.

In sum, even in a highly constrained situation, fiscal policies can play an important role in the current context to save lives and mitigate the economic consequences of the coronavirus. The bullets in the fiscal arsenal are scarce, but if well-designed and implemented, they could go a long way in building resilience against the pandemic’s impact on the region.

This article was first published on 31st March in the IDB’s blog:

Alejandro Izquierdo is Principal Technical Leader of the Research Department of the Inter-American Development Bank (IDB).  He holds a Ph.D. in Economics from the University of Maryland, an M.S. from Instituto Torcuato Di Tella, Argentina, and a B.A. in Economics from Universidad de Buenos Aires, Argentina