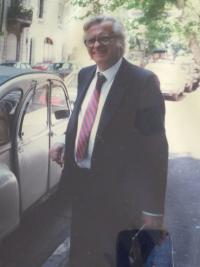 Ezequiel Gallo has died in Buenos Aires at the age of 83.

In the early days of the Latin American Centre, the mid 1960s, we had a good number of students from Argentina, and among them was Ezequiel, historian, accompanied by his wife Francis Korn, anthropologist and historian, and their small son Klaus, a future historian. In the atmosphere of almost limitless ignorance about the region that then prevailed in British academia, and  which it seems to me has not diminished all that much, all of us meant to be teaching – Raymond Carr, myself, Alan Angell – were anxious to learn from our students, and among my first recollections of Ezequiel is the memory of how much I learnt from him, particularly a sense of proportion, of measure in judgement.  But I also learnt effortlessly about Argentina, its nineteenth century history, Sarmiento, Mansilla, Roca, the Roca-Runciman treaty –  then a subject of frequent debate in the Centre – Perón, Frondizi …. In Buenos Aires later he was my guide to restaurants and bookshops – Platero, the  Libreria Colonial of the eccentric Uruguayan anarchist Washington Luis, the even more eccentric Fernández Blanco, inserting his impossible prices with a gold pencil, who believed that the world was run by Margaret Thatcher according to instructions encoded in Galsworthy´s Forsyte Saga – Ezequiel delighted in all these things. We agreed that Buenos Aires at that time had the finest waiters in the world, men with the gravity and distinction of cabinet ministers or senior medics.  We even idly planned a book of photographs, Los meseros de la capital.  One of his stories was his asking one of these imposing figures what had become of a younger recruit, and his receiving the reply “Ah, fulano, le faltaba vocación.”

Interest shifts: at that time there was much Cuba in the air, as later there was to be much Allende and Chile … through all these enthusiasms and traumas, not least those of his own country,  Ezequiel maintained balance and curiosity: though the stereotype of the Argentine is of someone not particularly curious about the rest of Latin America, Ezequiel in no way fitted it.  He could find fascination in the histories of Chile, Bolivia, or Colombia, in the analysis of their similarities and differences, and he was an acute and amusing observer of the characters and foibles  of  the string of visitors then passing through the Centre.  He had a great sense of fun.

That should not distract from his seriousness as a historian.  A student in Oxford of Max Hartwell, Ezequiel had strong liberal principles – he was exceptionally well-read in political philosophy – and methodological rigour. (With the support of Guido di Tella he was instrumental in acquiring Max´s library for the Instituto di Tella). His own work will certainly endure, as will that he did in collaboration with his friends and colleagues Roberto Cortes Conde and Natalio Botana.  His link with Oxford was unbroken. It lives on in Francis and in Klaus, and in the memories of the life-long friends he made here.