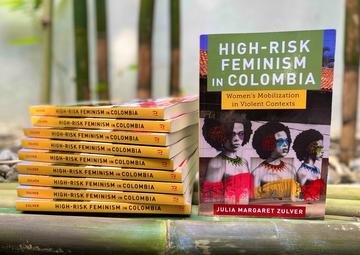 Dr Julia Zulver, Marie Skłodowska-Curie Research Fellow at the Latin American Centre and the Instituto de Investigaciones Jurídicas (UNAM), has published her first book – High-Risk Feminism in Colombia: Women’s Mobilization in Violent Contexts – with Rutgers University Press. The book was developed from her DPhil (Sociology, 2018) thesis, which was supervised by Professor Leigh Payne.

The book documents the experiences of grassroots women’s organisations that united to demand gender justice throughout and after Colombia’s armed conflict. In doing so, it illustrates a little-studied phenomenon: women whose experiences with violence catalyse them to mobilise and resist as feminists, even in the face of grave danger.

The focus of the book is to understand the gendered underpinnings of why women engage in feminist mobilisation, even when this takes place in a ‘domain of losses’ that exposes them to a high level of personal risk. The book follows four women’s organisations who break with traditional gender norms and defy armed groups’ social and territorial control, thus exposing them to ongoing and retributive punishment. It documents how, under the guidance of a charismatic leader, women are able to surmount the barriers to mobilisation when they frame their actions in terms of resistance, rather than fear.

High Risk Feminism draws on semi-ethnographic fieldwork carried out in different sites in Colombia – Bolívar, Bogotá, La Guajira, and Putumayo – from 2015-2019. It includes extensive interview and participant observation data in both urban and rural settings, with actors including leaders and members of women’s organisations, community members, and local government employees. The book centres women’s voices and local experiences at the heart of its narrative to build arguments about inclusive peace and security from the grassroots up. It concludes with recommendations relevant to policymakers and civil society organizations working on issues of Women, Peace and Security in conflict and post-conflict settings rendered dangerous by ongoing and gendered violence.

You can order the book online here.