Call for Papers: Second Wave of Democratization in Latin America, 1943-63 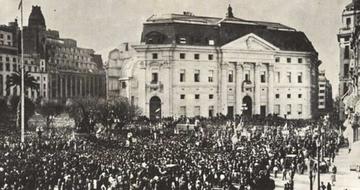 Doctoral students from across the Humanities and the Social Sciences are invited to submit proposals to participate at a two-day online conference on the Second Short Wave of Democratization in Latin America, taking place on 10 and 11 June. The event is organized in collaboration with the Latin American Centre and the Oxford Research Centre in the Humanities (TORCH).

The conference aims to examine the understudied theme of what Samuel Huntington referred to as the ‘second short wave’ of democracy (1943-1963) in Latin America. In this twenty year period, thirteen (out of twenty-one) countries in Latin America underwent democratic transitions, significantly outpacing the number of nations that remained under authoritarian rule.1 As per Huntington, this corresponded to almost a third of all democratic transitions that occurred during the period. Although most countries experienced regime reversals in the following decades, Colombia, Costa Rica and Venezuela remained stable democracies at least until the late twentieth century.

This drive for democratization and its eventual demise in the 1960s may shed key insights, not only on our understanding of how and why democracy succeeded or failed; but also on the very definition of democracy, its language, limits, and relation with other issues such as development or modernization. Reading this wave in a global context, for example, may drive us to question why this democratising tide was successful in Europe, but less so in Latin America; what role did the larger Cold War play in the tensions between reform and revolution; and how does this legacy illuminate current understandings and debates over democracy and its meanings. In doing so, the conference will look to combine historical perspectives on democracy with that of the social sciences.

The conference will consist of a keynote presentation and three panel discussions, and in addition to providing a forum for discussion, aims to establish a network of graduate students and career academics interested in the topic. Each panel will consist of three participants, comprising two senior academics and one doctoral research student, relating to the following key themes:

To apply, please submit a short proposal (approximately 250 words) for working papers of a twenty minute duration relating to any one of these themes and topics to swodconference2021@gmail.com, including details of your academic affiliation.

Each successful student applicant will also receive a book voucher of the value of £50. Deadline is 15 March 2021. Successful applicants will be notified during the week commencing 29 March.

The event will be streamed live online in addition to later being made publicly available in its entirety. The conference proceedings will also be published as a special edition. Please note that due to the short turnaround time, we do not require papers presented at the conference to be in their final form. Finalised papers suitable for publication will be submitted at a later date, currently TBC.

With our best wishes,