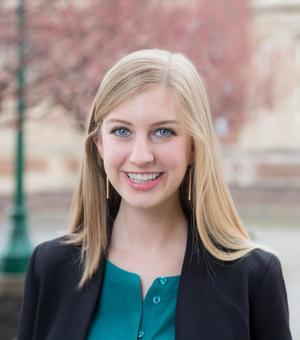 Sarah is a postgraduate student at St. Antony’s College, Oxford University. Born and raised in upstate New York, she holds a B.A. in Spanish and international relations from the State University of New York at Geneseo. After graduating, she taught English at the Universidad Cooperativa de Colombia in Pasto, Colombia, on a Fulbright teaching assistantship. Prior to Oxford, Sarah worked at the Inter-American Dialogue, a DC-based think tank focused on Western Hemisphere aﬀairs. In this role she helped inform and shape policies to promote energy security and climate change mitigation in Latin America and the Caribbean.

During her time at Oxford, Sarah hopes to better understand the role women play in forging more stable, peaceful and climate-resilient societies in Latin America. By highlighting the gender dimension of the climate-conflict nexus, her research will explore the ways women’s engagement with these issues engenders stronger policymaking, particularly in environmentally sensitive areas such as the Andes-Amazon.